Glutathione a naturally produced product in our bodies is a potent anti-oxidant that plays a variety of roles and has numerous benefits in our bodies. IV Glutathione can safely increase glutathione levels that become depleted with smoking, alcohol intake, illness, extraneous exercise and more.

It is thought that Glutathione plays an important role in the maintenance of a healthy immune system, helps boost energy, improve skin health, in the building and repair of tissue in the body, anti-aging and more.

We do offer Glutathione injections as an alternative to IV Glutathione.

It is thought that when glutathione is received frequently intravenously, it stops the production of melanin, an important product that darkens the skin. People who receive IV Glutathione treatments weekly or bi-weekly for a period of six to eight weeks have reported a shade lighter skin color and healthier skin complexion. Glutathione is used in many parts of the world along with vitamin c for its skin whitening effects. This is a side effect of the treatment. IV Glutathione or injections of Glutathione have many health benefits and improve energy as well as trap free radicals.

Glutathione has many health benefits and has been used in the treatment of chronic fatigue, heart disease, diabetes, autoimmune illnesses, Alzheimer’s disease, arthritis, asthma, HIV, to improve immune health, cancer and more.

The nutrient known as glutathione is one of the most beneficial nutrients that you can take on a regular basis for a healthier body. Found in every cell in the body, glutathione is a powerful antioxidant that helps the body keep harmful free radicals at bay. Free radicals are molecules that can kill healthy cells if allowed to accumulate in the blood. This is just one of the glutathione benefits that is offered, which is why people who want to live healthier elect to take receive IV Glutathione.

Glutathione benefits exceed its effect as just an antioxidant. Other benefits of this nutrient include the ability to minimize the severity of symptoms - and sometimes eliminate symptoms - related to illnesses ranging from asthma to cancer and from chronic fatigue to Alzheimer’s disease. 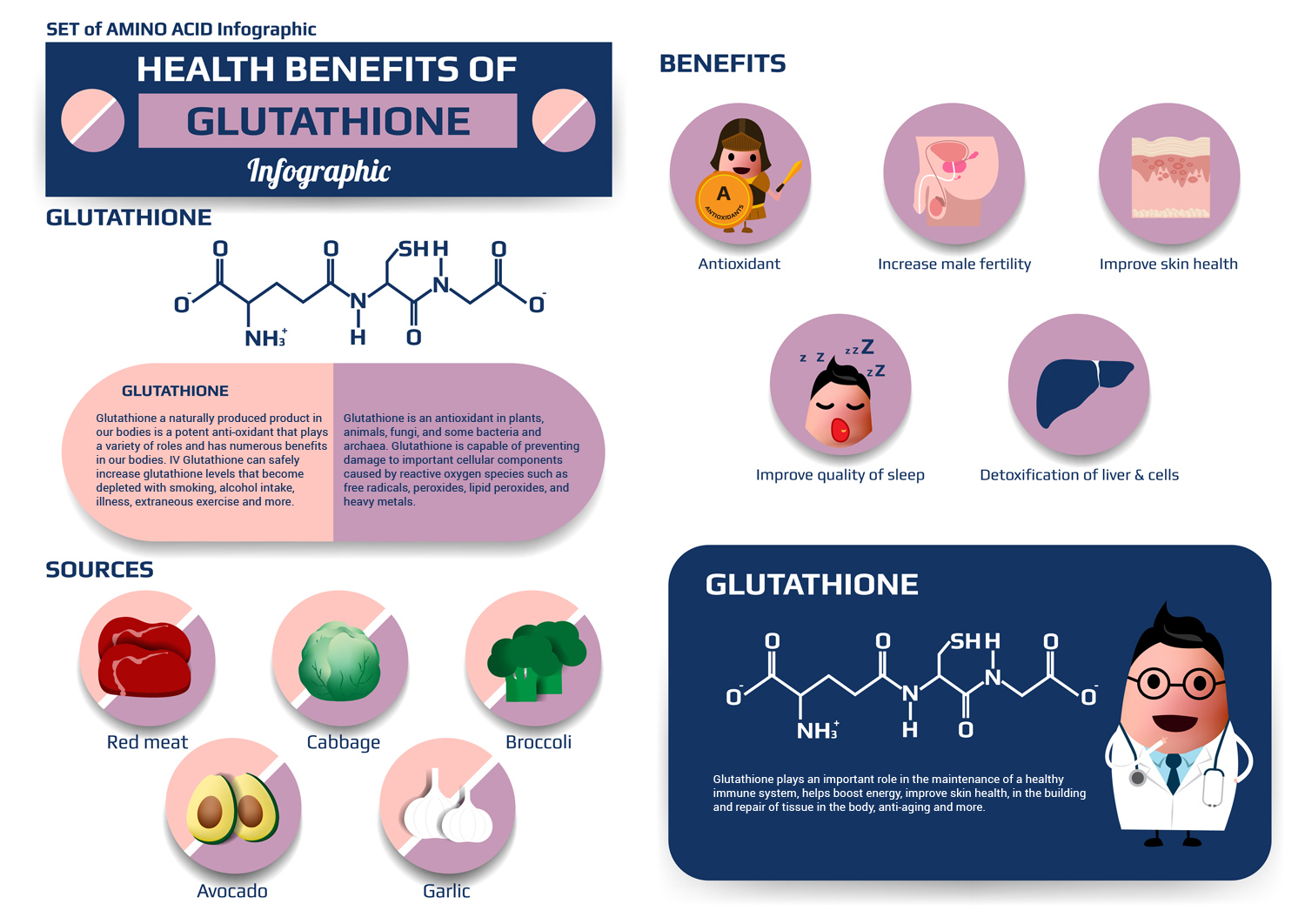 For those who are unfamiliar with IV vitamin therapy, it is the direct injection of nutrients like glutathione into the bloodstream. This means that nutrients delivered by an IV vitamin therapy session don’t have to pass through the stomach and the liver and will therefore remain more potent and effective than if those nutrients were consumed orally. IV injection allows nutrients to be delivered directly into the bloodstream where they can immediately begin the process of traveling to the parts of the body where they are needed the most.

For anyone who has never received an IV vitamin therapy session, there’s very little not to like. Sessions last from about 20 to 60 minutes, depending on doses prescribed, and patients are awake the entire time, which means a great opportunity to catch up on work via laptop or cell phone, or an opportunity to rest and relax with a good book or watching television. Discomfort during an IV vitamin therapy session is rare, and the most discomfort that most patients report is the slight pin prick of a needle at the site of IV injection. Because prescribed nutrients enter the bloodstream so quickly, it is not uncommon for patients to leave IV vitamin therapy sessions in a better mood and with more energy than when they arrived.